You know how they say they no good story starts with a salad; it’s true. Somewhat.

What do you do when you are floating high on a different plane?

You are capable of variety of things:

2. Fight with folks at another table (certainly not me),

3. Smile at strangers (absolute no no for me),

4. Randomly walk up to the Specials Menu board at a restaurant and write “I had a great day”.

If you’re lucky, you’ll forget most of it. But, if you have the kind of friends I do, they’ll make you remember most of it. They make for good stories, I believe.

Now, what do you do when you are drunk? With love?

You do worse things, worse than getting a stuffed blood-red heart cushion, worse than a giant teddy that takes up half your room, worse than heart shaped balloons with your names on it. You do things regular people don’t do (nothing to be proud of), things that would embarrass you for a lifetime.

This episode is about one such day.

One morning I was listening to “tareef karun Kya uski…” while scrubbing the dishes (my help has stranded me, thanks to all the evil eyes) and vigorously flipping my hair in typical Shammi Kapoor fashion. I felt a little dizzy after a while so, I stopped. I was strangely in a very singy-songy mood, specially for a day with no bai. I had switched on the TV by now, there were quite a few movies running and all of them coincidentally had leading ladies prancing around in yellow mustard fields in absolutely gorgeous drapes.

I was living in a perfect setting!

I wanted to flaunt my beautiful yellow dupatta and run around aimlessly in the mustard fields.

However, better sense prevailed, the husband’s warning rung in my head, and I dropped the idea. He had said it wasn’t really safe to go out on my own, which I think is a lie (I felt like Sita under house arrest).

After having painfully finished my spread, the husband was narrating stories of various posting locations, “Jab main *never heard of location* mein tha…”. I saw it as a golden opportunity and asked him if I could wave at him from our terrace while he rode his bike to work. He agreed after much begging and pleading (I have no idea why).

A little background here. His workplace is stone’s throw away and it’s pretty much visible from our terrace, the watch tower is, at least. So, I had said “Bike se wave karna”.

I raced to the terrace. Thrilled to have seen the husband a few seconds after he had left (it didn’t seem like ages at all), I waved and blew kisses. The husband had spotted me by now. He waved back, as promised.

Then he fell in love and also, in a ditch.

In defense of our nonsensical act, there are no roads here. Only ditches.

I wanted to laugh, really hard, but the good wife syndrome took over. A few minutes later, I got the most dreaded call. I had to contain my laughter and ask if he was hurt. “Dushman to baad mein, pehle tu maregi mujhe”. Way too dramatic a statement for a fall, I thought. 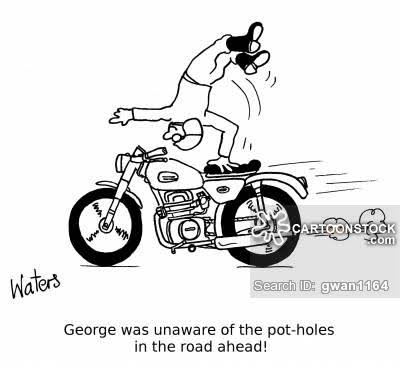