Hello to all of you who’ve missed me and hugs to those who haven’t.

Where was I all these weeks?

Traveling. Traveling not to exotic locations but shuttling between the parents’ house, the in-laws’ house, and my own little house.

And I am tired; tired of early morning flights, which refuse to leave before noon, tired of sleepy yet perfectly made-up men and women welcoming me on-board, tired of first time flyers trying to rush out of the plane, throwing their luggage on me, and injuring me in the process; tired of people not listening to safety instructions and then fidgeting with the seat belt. Simple things like these have de-energized me (I have no clue if any such word exists and I am too tired to Google. Sorry!)

So here’s another perfect travel story.

I was finally going home. My tickets were booked on a dangerously early flight, which would take me only five and a half hours to get home (the shortest duration; I could have been halfway to Bali).

I reached the airport at around 3 in the morning and after getting my luggage screened, as I made my way to get my boarding pass, I was stopped by Miss Airline Crew.

I was wondering if I had sleep-walked through security and misplaced my boarding pass. It wouldn’t be a surprise given the eerie hour.

Having sorted out the confusion and requesting for a window/aisle seat, I boarded the flight and cramped my way to my already cramped seat (no, I didn’t want to pay for an emergency exit seat). Sooner or later, tall people may have to stand the entire duration of the flight.

Mister Captain introduced himself and the crew and we flew; “Swadisht jalpaan” came and went, while I tried to catch some sleep amidst a woman throwing up, an uncle snoring, and a tantrum throwing child. I was trying to channelize my inner chi to allow me to sleep (It was an experiment. It failed).

Thankfully, we landed at our first stop, the land of tunday kababs. There were a maddening number of Honeymooners traveling along with me to the hills; while they exchanged mushy glances with their spouses, I looked at the beautiful chikkankari dupattas in a store. I wanted to buy one for myself but was distracted by people pushing through me and queuing up (yes, so what if they hadn’t announced the departure? What if the flight left people behind?).

I was seated beside two first time flyers. I had the aisle seat. They were enjoying their flight, while I groaned with back pain. They ate their snack, while I chewed an apple. They kept pressing the “let’s -summon-Miss Airline Crew-button” for no reason at all and she finally had to yell at them.

By God’s grace, it was time to land and I was already dreaming about a clean house, good food, and some sleep. The world got off their seats the moment we touched ground and my beyond impatient co-passenger pushed me out, climbed on to my seat, and reached for their luggage in the overhead compartment, while this other dude kept screaming “excuse me” in my ears.

I had lost it by now. I asked the dude to wait because he couldn’t fly out just yet and as I turned to my co-passengers to give them a good hearing, their luggage fell on me and I lost my speech in pain.

The husband, who was waiting to pick me up, laughed when I narrated my plight, teary eyed.

I was too tired to even roll my eyes. 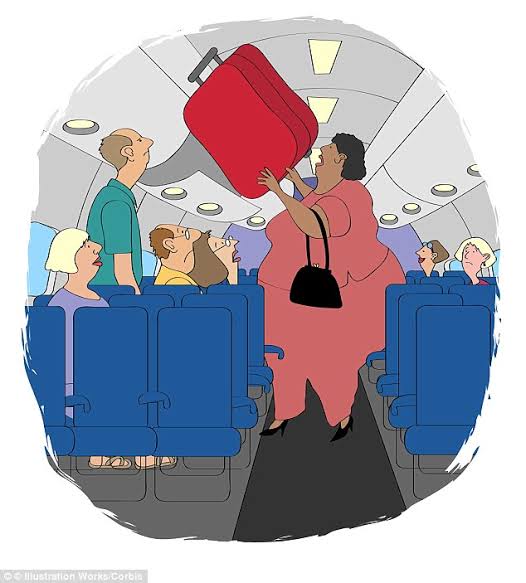